It's time to build back fairer

Maritime has enjoyed mixed fortunes in the pandemic; on the one hand, there has been the shutdown of cruise and the crew change crisis; on the other, record container carrier profits. What does the UK government's commitment to 'build back better' mean in this context?

Key industry figures shared their views on the future of the maritime sector at a high-profile webinar on 11 May 2021 hosted by Maritime UK and sponsored by Nautilus International. Ben Powell reports

With the UK looking towards a future beyond both Brexit and the Covid-19 pandemic, the government is focusing on the need to 'build back better'. This online event, attended UK Maritime Minister Robert Courts MP, explored how shorter-term priorities like job security and recruitment can be tackled alongside long-term challenges like a fair transition to green technology, freeports, automation and recovery for coastal communities.

The key consideration for the speakers was addressing the fundamental question about what 'build back better' should mean for the maritime industry.

Nautilus general secretary Mark Dickinson, who opened the discussion, was clear that it should be about working towards a fairer future: 'Let's get our priorities right. Let's think about the human beings,' he said. 'Our message to this webinar today is build back better, yes, but let's build back fairer as well'.

While the discussion was wide-ranging, taking in everything from freeports to cadet training, there was agreement that seafarers will play a key role in the recovery from the Covid-19 pandemic.

That view was articulated clearly by maritime minister Robert Courts MP, who paid tribute to the seafarers who 'kept the world moving' during his contribution to the online event and said that 'people are at the heart of maritime'.

'The last 18-months have been an extraordinary challenge,' he added, 'but we can be proud of the determination of all'.

The minister told the online event that the Maritime 2050 strategy would form the 'foundation upon which we can build our response from the pandemic'. He was also keen to convey a sense of optimism during his address, arguing that while 'we must remain vigilant of the challenges ahead, this period of economic recovery brings great opportunities'. 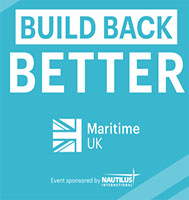 The webinar was moderated by Maritime UK chair Sarah Kenny and the speakers were:

While all the panellists were keen to strike a positive tone, there was also a recognition of the profound impact of Covid-19 on seafarers.

Moderating the event, Maritime UK chair Sarah Kenny referenced a Nautilus survey which found that 52 per cent of seafarers are rethinking their choice of career because of the pandemic. She asked the panel what steps can be taken to 'make sure that we don't lose a generation of seafarers and that we are continuing to attract and retain the best'.

Responding, UK Chamber of Shipping policy director Peter Aylott acknowledged the challenge and referenced the fact that the number of cadets has also dipped in the past year. He stressed the positive role that technology can play in improving opportunities and creating more attractive careers. He also argued that more should be done in highlighting the leading role that the UK plays in the maritime industry globally, and the diverse range of jobs that are available.

Maritime and Coastguard Agency chief executive Brian Johnson underlined the importance of 'making the necessary changes to officer training going forwards, so that the officers we turn out from the UK are differentiated compared with those from many other administrations, and are there and ready to take up the positions that the sector is absolutely going to need very soon as it goes through some really fundamental changes over the next 10 to 20 years'.

Mr Dickinson said that it was key to look at how we 'make the life of workers at sea more humane and more attractive to a diverse workforce' and challenged the industry to 'address the long-hours work culture, fatigue, stress and poor communications'.

Referring to his work as a maritime skills commissioner, he raised concern about falling cadet numbers despite increased funding. However, he was hopeful that the skills commission's work could address this challenge through equipping future merchant navy officers with the training required to take advantage of new opportunities.

Throughout the debate, Mr Dickinson and other panellists referenced the need to deliver a fair transition to green technology in order to ensure that jobs that are lost through phasing out fossil fuels are replaced with well-paid, quality roles in new industries.

Highlighting the Union's Build Back Fairer campaign, Mr Dickinson stressed the continuing importance of seafarers being designated as key workers. 'The UK showed some leadership in that respect,' he said, but he also warned that 'the crew change crisis is still with us and entering a very difficult second phase, which could be even worse'.

'If we're going to build back better, we need to embed the keyworker status and better define what it means in practice.'

He also raised the fact that the pandemic and recent Suez blockage had both shown more clearly than ever just how essential shipping is and called for accountability and transparency in the industry to addressed in order to tackle sea blindness.

He referenced the case of one ship owner who said: 'When we needed help from governments in the pandemic, they didn't come to our assistance, because we hide away in exotic palm fringe locations. We don't like being regulated heavily, or at all in some cases, and we don't like paying taxes.'

According to Mr Dickinson, this was the reason – or at least a major cause – for the fact that there is often a lack of understanding about the shipping industry and a corresponding lack of support when it is required.

A work in progress

Although the ninety-minute discussion covered an extremely broad range of issues, the common thread throughout was people. For all of the spending commitments and major infrastructure announcements that will follow under the 'build back better' branding, a better future will only be reached if there is a fairness for seafarers and maritime professionals.

The event set the scene for the 25 June Maritime 2050 Conference organised by Mersey Maritime and Maritime UK, where the longer-term ambitions of both industry and government will be explored in more detail against the backdrop of the recommendations set out in the Maritime 2050 strategy.

A series of further webinars focusing more closely on individual policy areas is also set to be announced by Maritime UK.

Shifting the balance: insights from the Maritime Skills Commission project on digital learning