Andrew Draper reports on a ground-breaking sexual harassment case that’s likely to make waves in the maritime industry. EXPLICIT CONTENT NOTIFICATION: This article of necessity contains some very strong language which played a pivotal role in the legal proceedings

A Swedish seafarer has claimed vindication for her decision to press criminal charges against a senior officer who sexually harassed her onboard, after the defendant was found guilty and ordered to pay damages by a court in the northern Swedish town of Luleå.

Elsa Hatz Grandin of Stockholm decided to report the harassment to the police after she quit her job as a trainee seafarer 43 days short of completing four years of study and training. She said her complaint to her employer had not been taken seriously, that they had tried to hush things up, and that the culture of inaction by senior company managers and government agencies in the face of sexual harassment had continued.

Ms Hatz Grandin is now working to build a business as a yoga teacher, only doing occasional stints onboard ships where she knows and trusts the captain. 'I don’t want to go back because I don't feel safe,' she said in an interview with the Telegraph.

The defendant, Sven-Bertil Kristian Nordström of Helsingborg, was ordered by the court to pay a fine of Skr54,000, compensation of Skr10,000 plus interest from the date of the crime (8 August 2017) to Ms Hatz Grandin, and Skr800 payment to a victim support fund – equivalent to a total of £5,300. He had pleaded not guilty and appealed against the verdict, but the appeal was thrown out by a higher court.

Ms Hatz Grandin and Mr Nordström were both working on the icebreaker Frej. She was new to the vessel and he was a long-serving crew member. He was first mate and Ms Hatz Grandin’s line manager. The court heard that the pair had been invited to a neighbouring ship for a drink. During the evening, Ms Hatz Grandin had wanted to leave as she noticed Mr Nordström was getting drunk, but he ordered her to stay. After a visit to the toilet, he said to her 'Have you dried your cunt?' He took her by the hand, stroked it and said: 'You're wet, have you dried your cunt with your hand?' He claimed in court testimony to have used the word 'skitta', which means 'dirty' in English. The word 'cunt' is 'fitta' in Swedish. One of the two witnesses to the exchange confirmed to the court Mr Nordström's use of the word 'fitta'.

The court heard that Ms Hatz Grandin was frightened, did not know what to say and tried to change the conversation. But Mr Nordström asked if she had played sexually with a mutual acquaintance and one other. When he was gone, Ms Hatz Grandin tried to leave but Mr Nordström insisted on joining her for the 10-minute walk back to their ship through a deserted industrial area at night. She said she was terrified. He threatened to throw her off the ship if she did not go to his cabin to give a urine test. He claimed he was merely referring to previous checks where urine tests had been taken and was referring to her as an example.

Ms Hatz Grandin says she now feels 'relieved' the trial is over – the first case of sexual harassment at sea that has gone to trial in Sweden, according to the SBF officers’ union. But she remains angry about the poor handling of the case by her employer.

After making an internal report of the harassment, she says she was contacted about the case by the HR department of the company operating the vessel, Viking Supply. She expressed dissatisfaction at the lack of action in the case and was told she could if she wished go to the police, but that this 'would have consequences'. She took that as a threat that she would lose her job.

A month after the assault, she was summoned to attend a meeting onboard ship with the master and her assailant, at which she was asked to sign a brief statement about the event and to promise not to talk about what had happened. At the meeting, she said, she had just come straight from a funeral, and was still upset and not thinking clearly.

Each side had given an account of the event and Mr Nordström expressed regret and asked for forgiveness. The statement said the matter had been settled and no-one was to talk about it. Ms Hatz Grandin said she signed because she was afraid of losing her dream job and was told this was company procedure for dealing with such cases. She is dyslexic, reads slowly and did not fully appreciate what she was signing – believing that further disciplinary action would still be taken against her assailant. 'Afterwards, I understood that something was wrong … I thought they would sort it out. I thought the meeting was about finding a solution and that they were doing something.'

An email about the matter was sent from the ship to the vessel owner, the Swedish Maritime Authority, with a request for this to be deleted after reading. This request was complied with, despite it being against state rules. The Justice Ombudsman hauled the authority over the coals for this breach, although no dismissals have taken place.

Ms Hatz Grandin felt her position had become untenable and resigned, then reported the matter to the police last December – going public to obtain justice.

'The lesson for me is it shows how important it is to have courage,' she says. 'And that guy, definitely, this kind of thing happens and it belongs with the police.' Ms Hatz Grandin has worked in many different jobs but has 'never seen anything like this before. It's just such a culture of letting things happen, really bad things. It's about bullying of guys as well. If you go to the police, you are screwed, but I took that risk.'

Ms Hatz Grandin despairs at what she sees as a culture of covering backs, looking the other way and doing nothing. 'These guys who were supposed to help me forced me to silence,' she says. 'I've seen how that works and I can’t go back. If something happens, there's no protection.' The overriding feeling during the process was of being alone.

Lennart Jonsson of the SBF officers' union assisted Ms Hatz Grandin through her case, and he welcomes the decision to go to court. 'This kind of matter should not be settled by an HR department or a ship's panel. Beyond that, it should be handled and settled by a court of law, which has happened, and we think that's great.'

Other alleged victims have come forward as a result of the case. 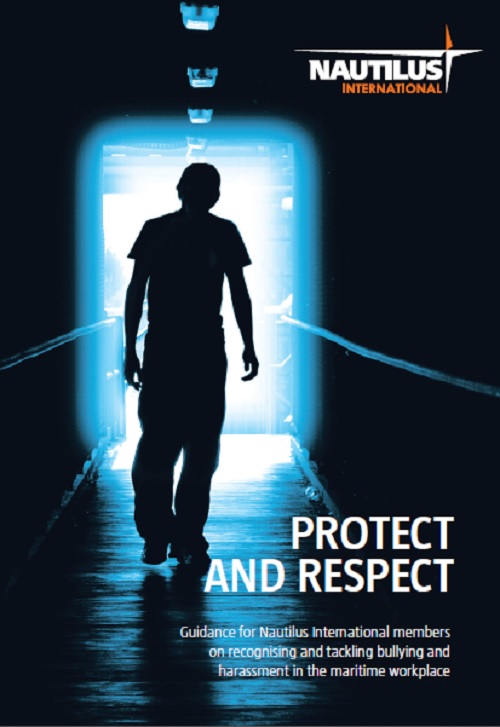 Nautilus is committed to supporting members who experience bullying or harassment at work, and works with the industry to improve the way companies handle employees' complaints of mistreatment by colleagues.

Members can find the information about identifying, reporting and tackling bullying and harassment in the Nautilus Protect and Respect guide – and how the Union can help.

Nautilus also played a major part in developing the industry-wide guidance document Eliminating Workplace Harassment and Bullying – Guidelines to Shipping Companies. This was published jointly by the European Transport Workers’ Federation and the European Community Shipowners’ Associations, and contains the standards employers should follow in their anti-bullying and harassment policies.

Making seafaring more appealing for a diverse and quality crew