A pioneering programme to promote seafarer welfare around the world has passed a major milestone, with the launch of Russia’s ﬁrst port welfare council.

Established in the port of Novorossiysk – Russia’s main Black Sea port – the new welfare board has been developed under the International Port Welfare Partnership Programme (IPWPP).

Developed and managed by the UK Merchant Navy Welfare Board (MNWB), the programme aims to encourage and support the creation of similar organisations worldwide, in line with objectives set by the international Maritime Labour Convention for seafarers to have appropriate ‘access to shore-based facilities and services to secure their health and well-being’.

Following a successful pilot project in Australia, the IPWPP – which is funded by the TK Foundation, the MNWB, Seafarers UK and the ITF Seafarers’ Trust – has gone on to develop further initiatives in such countries as the United States, the Netherlands, South Korea, and Nigeria.

The Novorossiysk project was launched following interest in the programme from the International Confederation of Water Transport Workers Union (ICWTWU) and the ITF afﬁliated Seafarers’ Union of Russia (SUR).

The port handles some 20% of Russian seaborne imports and exports, is home to the Black Sea ﬂeet of the Russian Navy and is also the terminus of the pipeline from the rich Tengiz oil ﬁeld in western Kazakhstan – making it the biggest oil port on the Black Sea.

The transport hub in Novorossiysk connects NCSP’s facilities at the port to extensive rail and road networks providing access to the major industrial, agricultural and population centres and other key cargo origins and destinations in southern and central Russia, Transcaucasia and central Asia.

Between 2000 and 2005 the ITF Seafarers' Trust provided grants to the SUR to help implement a programme to improve seafarers’ welfare. A number of seafarers’ clubs were built, including the Novorossiysk International Seamen’s Centre. Located centrally just outside the port, the centre provides internet and computers, washing facilities, a pool table, a chapel, money exchange and the free use of a gym situated close by in SUR’s regional office.

The centre manager Vitold Yatskevich and Sailors' Society chaplain Nikolay Motrenko are both highly respected within the local community and work together with their team of dedicated volunteers, ensuring that visiting crew are made to feel welcome, and providing free port transportation, ship welfare visits and pastoral care when needed. 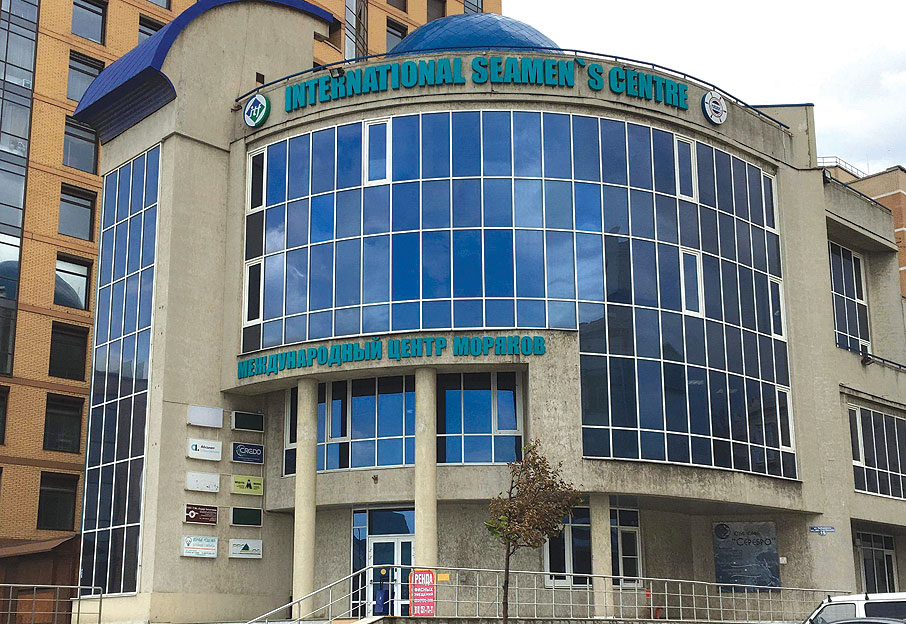 There is a dedicated port transportation system; the Sailors' Society possesses an ITF Seafarers' Trust grant-funded port chaplain vehicle and the centre uses a SUR-funded minibus, both of which are used to visit ships and transport crew to and from the centre.

Following an IPWP presentation, the inaugural meeting of the Novorossiysk Port Welfare Council (PWC) took place on 24 July 2018.  Representatives from key maritime organisations were in attendance and resolved to establish the council with immediate effect.

The newly-formed PWC has been charged with undertaking a review of the seafarers’ welfare facilities in the port at the earliest opportunity. The review will also consider the provision of drop-in centres at distant berths, port-wide wi-ﬁ and port access for ship welfare visitors.

The PWC has been encouraged to consider the need to apply to maritime funding organisations to help ﬁnancially support improvements to seafarers within the port.

‘There’s a cosy park near the City Beach in Novorossiysk,’ Mr Alyakrinsky says. ‘Visitors may see names of this port’s twin-cities, designed there on a symbolic compass. Portsmouth, in the UK, is one of them. Unfortunately, nobody can now remember when the last exchange visit between these two ports took place.

‘Ports everywhere are mostly engaged in business,’ he notes. ‘There is often no time to think about human relations between port communities working far away from each other. But this Russian port has been lucky, and we are working hard to beneﬁt seafarers and make Novorossiysk port more hospitable for the multinational crews that come here.’

You can read the latest Telegraph news and features on the website or download the latest edition as a pdf from our Resources section.