Fazilette Khan has spent much of her working life thinking about marine waste management. Of her 30 years as a seafarer and Nautilus member, she spent nearly half as an environmental officer on cruiseships. And since coming ashore for good last year, she has devoted herself to the GreenSeas Trust, the UK-based environmental charity she founded in 2002.

The charity actually came about before the shipboard environmental job, Fazilette explains: 'I was still working as a radio officer when I happened to go on holiday to Tobago and noticed how much rubbish people were dropping on the beaches and in the sea, especially plastic waste. I just had to do something about it, to help the country where my mum came from, so I worked out a plan to get local support for a cleanup. I thought people would take me more seriously if I was from a charity, so I registered the GreenSeas Trust in memory of my mum, Haida Khan.'

With Fazilette’s energy and fierce determination behind the cleanup project, the beaches of Tobago were soon looking much better. The solution wasn’t difficult, she stresses: 'We just had to put bins on the beaches! An oil company donated oil drums to turn into bins, and local volunteers helped me paint them so they’d be attractive and eye-catching.'

The GreenSeas Trust persuaded the local authorities to empty the bins regularly and start a recycling programme for much of the waste. Fazilette and her volunteers also carried out educational work to encourage local people to use the bins. 'I remember we went into a school once in Tobago and this 14-year-old girl was very resistant to our message until she realised that her own future work prospects in tourism would be affected by dirty beaches and seas. It was like a light going on. Whether it’s tourism, fishing or shipping, everybody who makes a living from the sea is harmed by pollution.'

With shipping companies phasing out the role of radio officer, Fazilette was in need of a new job, and her experience with the GreenSeas Trust made her a good fit for one of the recently-created environmental officer posts at Princess Cruises. The work involved processing and disposing correctly of all shipboard waste, from engine oil and used cooking fat to general garbage. Fazilette organised recycling and re-use wherever possible, and even found charities ashore to take her vessel’s discarded mattresses.

Meanwhile, she was still working on volunteer projects with the GreenSeas Trust during her shore leave, including an initiative in the French resort of Cannes to persuade tourists not to leave cigarette butts on the beach.

'People think cigarettes are biodegradable, but they’re not, because they have plastic in their filters. We gave out leaflets to tell people about this, along with free portable beach ashtrays supplied by the local council.'

The latest GreenSeas initiative has been to run a competition for product design students at the University of East London to come up with a special bin for use on British beaches. The BinForGreenSeas project is supported by Arun District Council on the south coast of England, and sponsored by waste contractor Biffa.

The competition winner, announced in January this year, was Laura Monica Carusato, with a design based on the funnels of classic ocean liners. 'We wanted something distinctive and fun to use, and Laura’s design really fitted the bill,' says Fazilette.

Laura adds: 'It’s designed so people don’t just place or drop plastic waste in the bin, they throw it in, so it becomes something children and adults can enjoy, like playing basketball.'

The next stage of the BinForGreenSeas project is to get the eye-catching waste receptacles mass-produced and out to as many of Britain’s busy beaches as possible.

A suitable factory has been identified by the GreenSeas team, and many coastal councils around the UK are interested in maintaining and emptying the bins, but the project needs more sponsors to come onboard.

'We’ll be approaching shipping companies soon,' says Fazilette, 'and there are multiple benefits from getting involved. As well as joining the essential effort to keep waste plastics out of the sea, they can gain wider public recognition for their brand, as sponsors’ names will appear on the bins.

Individuals can donate too, and every contribution will help; I firmly believe that what each one of us does creates a ripple effect that can change the world. 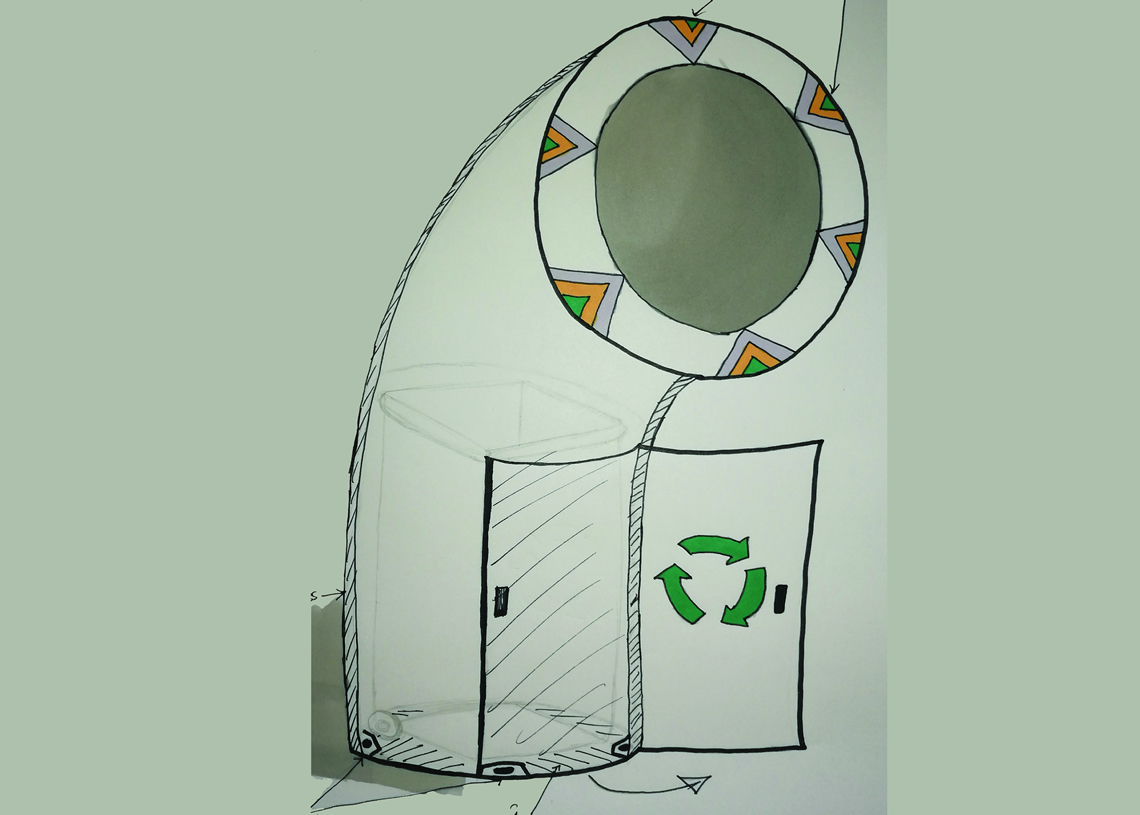 The competition winner, announced in January this year, was Laura Monica Carusato, with a design based on the funnels of classic ocean liners. ‘We wanted something distinctive and fun to use, and Laura’s design really fitted the bill,’ says Fazilette.

Ocean Cleanup – tackling the plastic problem on the high seas